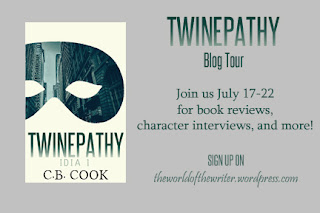 Today I have a special guest, the author C.B.Cook  to celebrate the release of her new book, Twinepathy. 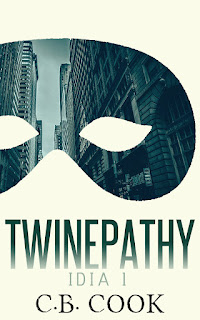 Albany York has a secret.

Albany and her twin sister, Brooklyn, have spent years successfully hiding their telepathic connection. But when a girl falls unconscious at their doorstep, the girls learn that they might not be the only people in the world with extraordinary powers and that a memory thief is on the loose. As the twins try to help the girl find her memories, they discover that the superhero world might be bigger—and more dangerous—than they ever imagined.

C.B. Cook is just a girl trying to find out where her King is guiding her, while writing the stories of the people she creates, the worlds she wants to live in, and the adventures she dreams about. Also known as a mysterious creature called an "author". She's a Christian and a home school graduate dedicated to changing others’ lives through the power of the written word.

You can find C.B. at her blog, The World of the Writer.
And now for an interview with the author herself!

1. When did you start to write?
I started to write when I was in fourth or fifth grade. My first story that was more than a few pages was actually a horse story that was very cheesy and will probably not see the light of day.

2. What is your favourite part of the writing process?
Definitely exploring the characters. I love to see how their pasts and their current situations affects their personalities, and it's always intriguing when you factor in superpowers to the mix.

3. What is your favourite genre?
While I'm new to the superhero genre, both reading and writing, I have to say it's a new favorite of mine. But before I found that, I'd have to say my favorite genre was spy stories or mystery. Both of those are ones that I love to read!

4. Who is your favourite character to write?
This is a hard question! I have to say, I really enjoy writing about Jen. She's a really complex character, and her power's really intriguing.

5. Tell me about a tea party with ten characters (yours or other peoples). Ohhhh! This is one of the best questions ever!!!! Okay, let's see... I would invite Blaze and Maddie from Twinepathy, for sure. Westley from The Princess Bride would be invited, and so would Thorne from The Lunar Chronicles by Marissa Meyer (certainly one of my favorite characters ever). Then I'd invite Aragorn and Sam from The Lord of the Rings, and also Sherlock Holmes for sure. And then some Brandon Sanderson charries: David from Steelheart and Kelsier from Mistborn. And, finally, I'd bring along Jen (from Twinepathy) for some sanity.

And how it would all go down? After everyone arrived (with Thorne fashionably late), I'd serve the tea and tea cake cookies and such, with extra for Sam, of course, since hobbits have such big appetites. Of course, I'd bring donuts for Blaze. I'm sure he and Thorne would get into a snark war, with David throwing in some terrible metaphors about pandas or something, with Sherlock Holmes on the side making snide observations until they gang up on him. Westley and Aragorn might get into a sword fight, which I would definitely encourage (I'd just want to see it!), and I can imagine Maddie throwing something at Blaze with her powers and Kelsier asking her if she's a Misting. And then the two of them would probably start messing with the others by moving their drinks or stealing their food. And the whole time, Jen would just be smirking and commenting on the scene to me.

I'd just be laughing my head off in a corner. :D

Thanks so much for these great questions, Jemma!!! I really enjoyed answering them, especially the last one. :D