This is not what the blog post is about

What the blog post is about is a fun craft I found out called Warfare by Duct Tape
I have spent the last few weeks making weapons out of Duct tape, foam and pipes.
Homeschooling is awesome :D.

Here are some of my creations: 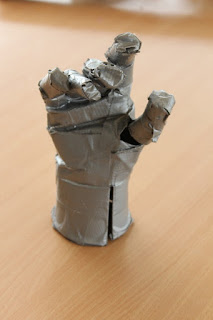 I gave all my swords literary names :).

What literary name would you give a sword, dear reader?
Bye for now :).

I was having a sleepover at my youth group last night and we watched an adorable movie!

Home is a movie about an alien called Oh who has come to live on planet earth. Oh has a bit of trouble making friends. His trouble gets even worse when he accidental invites some terrifying aliens to his house-warming party. The movie follows his adventures with a girl called Tip and her cat, Pig, as they try to save Earth.

I really enjoyed it. Oh is so cute! And Tip. And Pig. And all the Boovs. The plot is good and the characters are creative and real. I would recommend Home to everyone, though there are a few emotional scenes that really little or very empathetic children might be upset by.

Bye Readers and thanks for reading! (Now go get watching :) )

The Reads of July

I have been requested to write a post about what I have been reading lately. So I give you...
The (completed) Reads of July! (Be warned, I read a lot in July)

To Kill A Mockingbird by Harper Lee

Great book! I really liked it. I normally don't like 'growing up' kind of books, but this one was very good. It's about a girl called Scout growing up in a little town in Alabama. I would recommend this to people 13+

Alice in Wonderland, Through the Looking Glass and the Hunting of the Snark

Lewis Carroll was a genius! The books about Alice are funny, sweet and whimsical all at the same time. I would recommend them to anyone who can read. The Hunting of the Snark was an amusing poem which is great to read out loud. Younger readers would find it a bit confusing but other than that everyone should read it. (Out loud, it sounds even funnier)

The Last Continent by Terry Pratchett

Another amusing book by Sir Pratchett. Rincewind has been teleported to Australia (I mean Fourecks), the Librarian has a cold and the Wizards have gone back in time. :).
Please note, we Australians do not say G'day all the time (practically never) and we don't drink beer all the time either.  I would recommend this for mature readers who like satire and dry humor and can overlook the rude references/language.

The Hunger Game and Catching Fire by Susanne Collins

Very exciting! Hard to put down, I really enjoyed it. Rather violent though :(
I'd recommend it to mature readers who like dystopian novels and can cope with the violence.

Until That Distant Day by Jill Stengl

I really enjoyed this. It was well written and I loved the characters.
I would recommend this to people who like French books, and are interested in times surrounding the French Revolution.

An nontraditional princess runs away to live with a dragon. Very fun. I'm probably not the target audience though. Children 6-11 would probably really love it!

Another children's book is
The Secret of Indigo Moon by G. P. Taylor

The second in the Dopple-Ganger series. These books are cleverly done, with pages of words and pages of graphic novel. Good for kids who benefit from a mix of graphics and text. 7+

King Arthur and Her Knights by K. M. Shea

Have you ever wondered what it would be like if King Arthur was a girl? A cleverly done tale of King Arthur (or Britt Arthurs). I've read the first two books, they were short but fun.
I would recommend them to people who like fantasy, King Arthur and are in their teens.

And finally: (this isn't really a novel, but I loved it so much)
The Discovery of Dragons: New Research Revealed! by Graeme Base

A collection of letters detailing the discovery of dragons from all over the world. The letters are hilarious and the artwork is amazing (like all Graeme Base books).

If you want to know more books I've read in July look HERE.

I've been meaning to write this post for a looonnng time. And here it finally is.

A few months ago I learned to crochet. After seeing some cute pictures on Pintrest I decided to crochet the Avengers! Here is my first Avenger (Captain America). What do you think?
And last month for my little sister's birthday I crocheted her a litter of Guinea Pigs!
They're called Speckles, Stripe and Splotches. Can you guess which one is which? 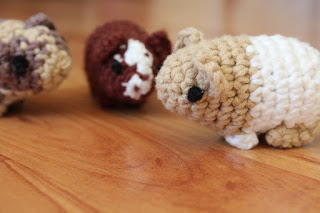 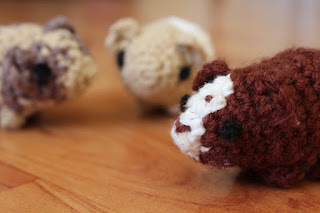 Thanks to Mum for the photography. You can see more of her awesome pictures at her blog, Three Little Chickens

For any crocheters out there, these are the patterns I used:
Cappy's body, Cappy's Shield. And the Guinea Pigs.

Bye for now! Thanks for reading!
Posted by Unknown at 11:18 2 comments: